Concrete making involves many stages and processes. The following two stages are involved in the manufacturing of concrete. 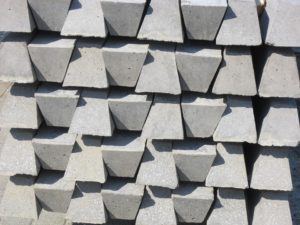 It is the most important stage of the manufacturing process. This is where the weighing of materials takes place to make sure that the right quantities are achieved. It is further narrowed into two stages; volume batching and weight batching where volume batching is mixing the ingredients by their volume while weight batching is mixing ingredients by their weight ratio. The ratios are placed according to the already set standard codes.

This is mixing of the materials to produce an even and a high-quality concrete. The objective of mixing is to produce or achieve a uniform and a workable paste. The mixing can be done manually by the help of tools such as shovels. For major or complex work, mechanical machines known as mixers can be used. They usually come in different sizes and shapes. The mixer comes with drum which rotates and is tilted into a design. The drum has mixing blades which mixes the ingredients intimately each time the drum rotates.
Jerking should be avoided when mixing as it can easily lead separation of coarse aggregates from fine particles. After the mixing, the fresh concrete should be placed on a formwork which is properly designed in the construction work. Additionally, the formwork should be strong, rigid, water proof, and a bit wet before pouring the concrete. If possible, the pouring should be made vertical as inclined pouring will lead to segregation. It is always advocated for a good workmanship while laying the concrete as contrary can spoil even the best designed concrete.

These are relative proportions of important parts of materials mixed together to make a concrete. For instance, 2:3:5 means that two parts of sand, three parts of coarse aggregate for five parts of cement. The quality of the concrete is therefore dependent on those relative quantities.
Various methods have been used to determine the right portions. In usual constructions, the experienced masons decide on the ratios sand and water to be mixed with the volume of cement. Contrary to that, in a more major work, reliable methods are used to come up with the correct and the right ratio.

Batching, mixing, placing and compaction of concrete are the key aspectes of concrete making. Read the post to learn in depth.